This afternoon I went to the Winkleman Gallery to see Jennifer Dalton’s exhibition “Cool Guys Like You.”  This show was a perfect storm for my NPR/Art History/feminist nerd aesthetics.   The show critiques media figures like Jon Stewart, Terry Gross, and Rachel Maddow, lack of female guests.  This thesis of the exhibition is revealed in press release:

Despite the vaguely trite tone of this call to arms, Dalton sheds light on important issues within our daily digestion of media.  Instead of simply consuming the constant stream of information, Dalton reminds the audience of the importance of self-interpretation of the news and critical thinking.

For a small show, many different media categories were represented, like sculpture pencil drawings and photography.  The piece what Does An Important Person Look Like? consists of screen shots from The Colbert Report.  The screenshots break down into profession and then are color coded according to gender.  It becomes apparent that the majority of the guests are white, male, politicians, or actors. 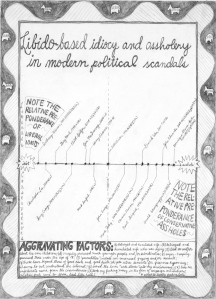 Dalton’s Idiocy and Assholery in Modern Political Scandals reveal an adolescent aesthetic, but reveal a telling graph of politicians involved in sexual scandals.  Despite the kitsch of the border, the drawing reveals the shocking frequency of politicians’ public disgrace. 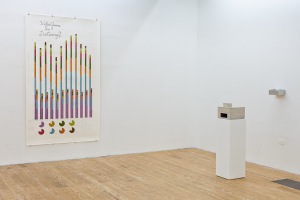 The interactive quality of the pieces Cool? and Only in America (or, I Can’t Trust Myself) deal less directly with media, but reveal Dalton’s aspirations for people who consume media.   In the sculpture Cool? the viewer is invited to put their hand in a box and stamp it.  Before the stamping oneself, the viewer doesn’t know what image will be stamped.  The blind consumption of media is what Dalton’s wishes to recreate with this piece.

The witty exhibition reveals a gap in our cultural landscape.  The exhibition runs through October 15th, 2011.